Arms Trade Treaty (ATT) not to be ratified by US 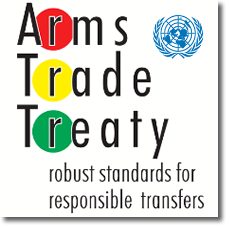 US President Donald Trump announced that USA will not abide by and will never ratify Arms Trade Treaty (ATT), a UN treaty aimed at regulating global arms trade.

With aim of regulating international trade in conventional arms (from small arms to battle tanks, combat aircraft and warships), it was entered into force in 2014. It establishes common standards for international trade of conventional weapons so as to reduce illegal arms trade.
The member nations are required to keep records of international trade of weapons and prohibit cross-border shipments that can be used for human rights violations or attacks on civilians. It was originally signed by 130 countries but currently only 101 have ratified and joined it. India is not a signatory.

ATT is misguided and is encroachment on US sovereignty. It does not place any restrictions on types or quantities of arms bought, sold, or possessed by states. It also does not impact state’s domestic gun control laws or other firearm ownership policies.

The US President Joe Biden has planned to lift the refugee cap by May 2021. The former President Don...

Switzerland has voted on March 7, 2021 in favour of the proposal to ban the full facial coverings su...

The United States Department of Commerce is all set to tax aluminium sheet exporters from the 18 cou...