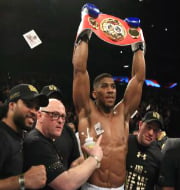 British professional boxer Anthony Joshua has won the 2016 International Boxing Federation (IBF) heavyweight title.
To win this title, he defeated Charles Martin (US) in the second round at the O2 Arena in London, United Kingdom.
With this, he became the first boxer in history to hold the Olympic super-heavyweight title and a version of the world heavyweight (IBF) title simultaneously. He had won gold at the London 2012 Games.