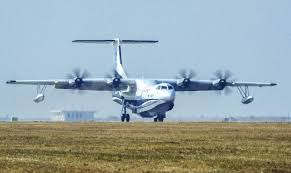 China’s first home-grown amphibious aircraft AG600 (code-named Kunlong) successfully carried out its first take-off and landing on water. It is claimed to be as the world’s largest amphibious aircraft. In this maiden flight, the seaplane took off from Zhanghe Reservoir in Jingmen, Hubei’s province and stayed airborne for about 15 minutes

AG600 is third member of China’s large aircraft family following large freighter Y-20 and large passenger aircraft C919. It has been developed and built by state-owned aircraft giant Aviation Industry Corporation of China. It had made its maiden flight at the coastal city at Zhuhai in December 2017.
AG600 can land and take off from water. It has wingspan of 38.8 metres. It is powered by four turboprop engines. It has been designed and built by China’s state-owned manufacturer Aviation Industry Corp of China. It is capable of carrying 50 people and can stay airborne for 12 hours.
It has operational range of 4,500-km. This aircraft has military applications and also can be used for firefighting and marine rescue. Its flight capabilities put all of China’s artificial island-building projects in disputed South China Sea (SCS) well within its range