3rd India International Science Festival to be held in Chennai 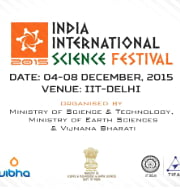 The third India International Science Festival (IISF-2017) will be held in Chennai, Tamil Nadu from October 13-16, 2017. It will be organised by Ministry of Earth Sciences (MoES), Ministry of Science and Technology (MoST) and  Vijnana Bharati (VIBHA).

The objective of IISF 2017 is to instil scientific temper among masses and showcase India’s contribution in field of science and technology over years. Top scientists from government are expected to participate in four-day festival at IIT-Chennai.
The festival aims to build strategy for rural India through advancement of S&T. It also intends to make innovation beneficial for people and develop technology that is affordable to the masses.
The Festival will be held at various venues, which include Central Leather Research Institute (CLRI), Structural Engineering Research Centre (SERC), National Institute of Ocean Technology (NIOT), IIT-Madras and Anna University.