SIMBEX: Singapore-India Maritime Bilateral Exercise to be held off Andaman Sea and Bay of Bengal 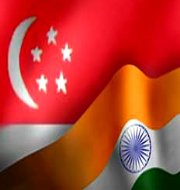 India and Singapore will hold 25th joint naval exercise SIMBEX, acronym for Singapore-India Maritime Bilateral Exercise from November 10 to 21 in India off Andaman Sea and Bay of Bengal. SIMBEX 2018 will mark silver jubilee of exercise and will be largest edition since 1994 in terms of scale and complexity.