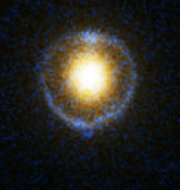 An international team of astrophysicists have discovered an unusual astronomical object — an Einstein ring.
This phenomenon was predicted by Einstein’s theory of General Relativity and has been given its own name “The Canarias Einstein ring”.
What is Einstein ring?