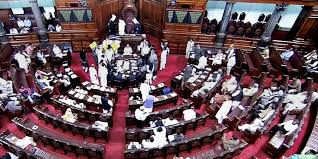 The bill was passed amid uproar by opposition and walkout by MPs of several parties. It was passed in Rajya Sabha by a voice vote. However, opposition asked for division when the government moved bill for consideration. 83 members voted favour while 45 members opposed it. Just before the passage of the bill,  Congress party too walked out. Lok Sabha had passed the Bill on 22 March, 2021.

The Bill amends certain powers and responsibilities of Legislative Assembly and Lieutenant Governor. According to the Bill, “government” in Delhi means Lieutenant Governor (LG).  Bill provides that Rules related to procedure and conduct of the business in assembly must be consistent with Rules of Procedure and Conduct of Business in Lok Sabha. It prohibits Legislative Assembly from making any rule to enable itself or its Committees to consider matters of day-to-day administration of Delhi or conduct any inquiry into administrative decisions. Bill makes all such rules made before its enactment void. Bill also provides that, LG’s opinion must be obtained before taking any executive action on the decisions of Minister or Council of Ministers.  It also requires for LG to reserve those bills for President which cover any matter outside the purview of powers of Legislative Assembly.