The labour reforms initiated by the government of Rajasthan have spurred growth in Rajasthan’s MSME sector.

What were the Reforms?

In 2014-15 the government of Rajasthan amended four labour laws:

Changes brought in by the amended act

The latest Economic Survey of 2019 has praised Rajasthan for holding it up as a role model for the rest of the country. 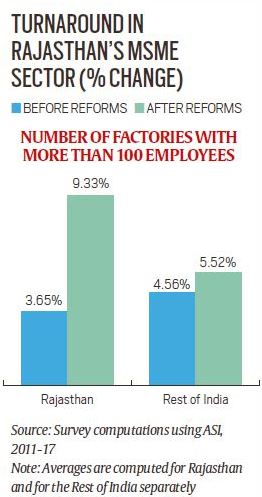 The survey compared the change in Compound Annual Growth Rates (CAGR) two years before and two years after the law change. The Survey notes that “It can be clearly seen that, for all variables, CAGR post labour reforms in Rajasthan has increased significantly vis-à vis the Rest of India”.

Also, the number of firms with 100 employees or more has increased at a significantly higher rate in Rajasthan than in the rest of India.