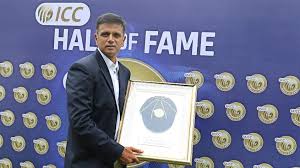 Former India captain Rahul Dravid was officially inducted into International Cricket Council’s (ICC) Hall of Fame. He presented memento by the legendary opener Sunil Gavaskar at Greenfield International Stadium in Thiruvananthapuram, Kerala. With this, Dravid became fifth Indian cricketer after Bishan Singh Bedi (inducted in 2009), Sunil Gavaskar (2009), Kapil Dev (2010) and Anil Kumble (2015) to be named on the elite list. In July 2018, ICC had announced Rahul Dravid, Australian legend Ricky Ponting and former England Women’s wicket-keeper Claire Taylor’s induction into Hall of Fame during ceremony in Dublin. Ponting is 25th from Australia to receive the honour. Taylor is third female player from England to be named on the list and seventh overall.

Dravid has scored 23, 208 international runs for India across formats, including 48 hundreds and 146 fifties. He has scored the runs at an average of 45.41. He has scored 13,288 runs in 164 Tests, which comprises 36 centuries, and has scored 10,889 runs in 344 One Day Internationals (ODIs) with 12 centuries. He has just played one Twenty20 International. He was named ICC Cricketer of the Year and ICC Test Player of the Year in 2004. He holds world record for being excellent slip fielder and finished his Test career in 2012 with 210 catches.

It recognises achievements of legends of game from cricket’s long and illustrious history. It was launched by the International Cricket Council (ICC) of Dubai on January 2, 2009 as part of its centenary celebrations in association with Federation of International Cricketers’ Associations (FICA). Members of Hall of Fame assist in selection of future inductees. The inaugural inductees were W. G. Grace and Graham Gooch. Former England women’s cricket team captain Rachael Heyhoe-Flint was first woman cricketer to be inducted in the Hall of Fame in 2010.