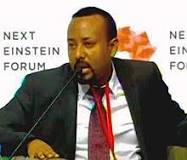 The 100th Nobel Prize for peace has been awarded to the Ethiopian Prime Minister Abhiy Ahmed Ali for his efforts towards peace and international cooperation. The prize was awarded in particular to honor his initiatives to resolve border conflict with Eritrea.

Ali became the Prime Minister of Ethiopia in 2018. Since then he was keen in resuming peace talks with Eritrea. He quickly worked out principles of peace agreement with the president of Eritrea Isaias Afwerki and ended the long “no peace no war” stalemate.

Apart from this, he also initiated many reforms in Ethiopia. He spent his first 100 days of power in lifting the state of emergency in the country. He granted amnesty to 1000s of political prisoners, legalized outlawed opposition groups, discontinued media censorship, increased the influence of women in Ethiopian political and community life.

There had been great speculation over the prize with the climate activist Greta Thunberg being tipped as the favorite. The 16 year school girl is a Swedish teenager who became famous for her activism in August 2018. She initiated a mass movement “School strike for climate” where the teenagers quit school demanding for action towards climate change.