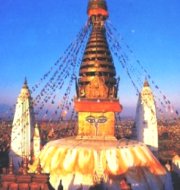 Nepal’s devastating 7.9-magnitude earthquake on April 25 has partially damaged Swayambhunath Stupa located in Kathmandu which is believed to be the world’s oldest Buddhist shrine.
During this earthquake several other monuments situated in the vicinity of the 2,000 year-old Lichchhavi-era Buddhist shrine have been damaged but the main stupa has remained intact during the earthquake.
Swayambhunath Stupa is one of the main Buddhist shrine and most visited tourist sites in Nepal. The stupa is believed to have originated at a time when Kathmandu was inhabited by a deity called Manjushri. It was drained out a big lake by cutting the Chobar hill situated in southern Kathmandu thousands of years ago.
Three other Buddhist monasteries were also damaged including Jyoti Kirti Bihar, Karmapa Bihar, Maha Bihar, Pratapur, Shantipur, Anantapur and Manjushree temple.
The earthquake also has threatened the existence of one of the 7 UNESCO-listed world heritage sites of Kathmandu.
Famous Hindu shrine Pashupati and House of Living Goddess Kumari in Kathmandu has remained unharmed in the earthquake.
However, 300 year-old Kashtha Mandap temple situated in the heart of Kathmandu city and 200 year-old Dharahara tower are among the important heritage sites which were damaged by the earthquake.