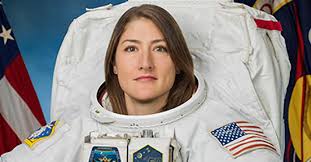 US Astronaut Christina Koch has set a record of longest space flight by a woman. She has spent 300 days in space.

Christina Koch arrived at International Space Station on March 14, 2019, setting the record of spending the maximum number of days in space. She broke the earlier record set by former space station commander Peggy Whitson. She is an electrical engineer and her record will help NASA learn about the effects of spending longer duration in space. It will also help to support deep space exploration missions to mars and moon.
Christina Koch entered the International Space Station on March 14, 2019. She entered the space on the Soyuz MS-12.  She was also a part of the first all female spacewalk in October 2019.

Deep Space Exploration is a branch of astronomy that involves exploring outer spaces. According to International Telecommunication Union, deep space starts at a distance of 2 million km from the earth.

Beam-powered propulsion uses energy beam to propel the space craft. Usually the beam generated is microwave.  In this system, a heat exchanger is used to generate the beam. The fuel used includes methane, ammonia and hydrogen.

In the technology of anti-matter, collision between the article and its anti-particle releases energy in the form of heat or light.