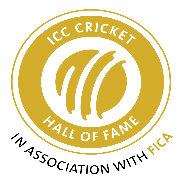 The International Cricket Council (ICC) honored three retired legends of the game of 22 yards with the inclusion in the ICC Cricket Hall of Fame.  The three great players are South African all-rounder and former coach of IPL team KKR, Jacques Kallis, and World Cup-winning Australian all-rounder Lisa Sthalekar and Zaheer Abbas of Pakistan, who is also known as Asian Bradman.

What is the ICC Cricket Hall of Fame?

Who are the Indian Cricketers in the Hall of Fame?

Which country has the highest number of players under the list?

The ICC Cricket Hall of Fame list is topped by the England team in terms of the total number of players. England has 28 players under the list. Australia has 27 and West Indies has 18 players. A total of 93 players are there in the list.