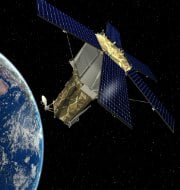 The satellite has provided Israel technological superiority. Ofek-16 is to provide high-quality surveillance to its military through electro-optical reconnaissance technology.

The satellite was launched using a locally developed “Shavit” launcher.

The satellite is to revolve the earth in the low earth orbit. A Low Earth Orbit is at a height of 2,000 km.

The Shavit rockets are produced by Israel since 1982. The rocket is a three-stage solid propellant that is designed to carry payloads up to 250 kg into Earth low orbit.

The first of the Ofeq series was launched in 1988. The previous satellite of the series, Ofeq-15 was launched in 2016. The Ofeq satellites have lifespan of one to three years. They are mainly used for surveillance purposes such as reading license plates in Baghdad, etc.

The Ofeq satellites make half a dozen passes per day over Israel and its neighbours. On the other hand, the Russian and US spy satellites make only one or two passes in a day.

Israel has been building its surveillance capabilities to monitor its enemies, mainly Iran and is nuclear programmes.