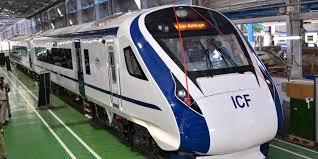 Are the trains indigenous?

These trains are 100% indigenous. This is in line with the government’s Make in India program and Aatmanirbhar Bharat’s ambition.

Where is the trainset designed and manufactured?

What are the safety and passenger comfort features?

Which signaling system is used in Delhi-Meerut RRTS?

The Delhi-Meerut RRTS will be the first in India to adopt the European Train Control System (ETCS) hybrid Level 2 signaling system. This is the core signaling and train control component of the European Rail Traffic Management System (ERTMS).

What will be the speed of the trains?

The RRTS corridors will operate the fastest trains in India with a design speed of 180 kmph.