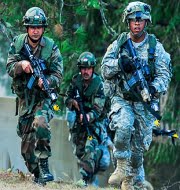 India and United States (US) Joint Military Training Exercise Yudh Abhyas 2016 concluded at the Chaubattia Military Station in Ranikhet, Uttarakhand.
The bilateral military exercise was the twelfth edition in the YudhAbhyas series which started in the year 2004 under US Army Pacific Partnership Program. This was the third time the exercise is being conducted at Chaubattia in Uttarakhand.
Key Facts