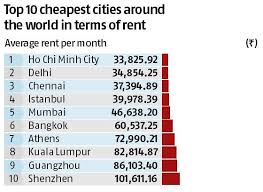 Details of the Report

As per the report, Ho Chi Minh city has been found to be the cheapest in the world whereas New York has been found to be the most expensive city to rent, in the entire world. Mumbai comes at the 5th position in the list of the cheapest cities in the world. Bangkok in Thailand, Athens in Greece, Kuala Lumpur in Malaysia contribute to the remaining positions in the list.

Coming to the expensive cities in the world, four cities are from the US only – New York, Los Angeles, Las Vegas and Miami that form the top five along with Venice in Italy. Dubai, Amsterdam, etc. are also there in the list of top 10 cities which are very expensive in the world.

Relevant to this report, the EIU also carries out a survey in order to find out the most livable cities in the world. The report is prepared based on data collected from 140 cities on a range of factors including the political and social stability, crime, education and access to healthcare. In the year 2019, this reported the Austrian capital Vienna as the most livable city in the world, followed by Melbourne in Australia.