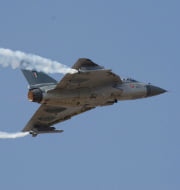 On March 18, 2020, the Defence Acquisition Council approved the procurement of indigenously built 83 Tejas fighter aircrafts for Indian Air Force. The proposal is to be placed under Cabinet Committee on Security. The proposal is considered as a major boost to Make in India.

The Light Combat Aircraft LCA-Tejas was designed by the Aircraft Development Agency (ADA). The ADA operates under DRDO (Defence Research Development Organization). It was manufactured by Hindustan Aeronautics Limited (HAL).

These aircrafts are expected to be the backbone of Indian Air Force. It is to be noted that India lost the 1962 war with China due to lack of sufficient fighter jets.

The Defence Acquisition Council operates under Ministry of Defence and is the highest decision making body. The decisions include on policies, acquisition and capital for the three services. The Minister Defence (currently Shri Rajnath Singh) is the chairman of the council. It was formed in 2001 after Kargil war in 1999.