In January 2015, the MOPSI had released the new series of national accounts, revising the base year from 2004-05 to 2011-12. With this, the GDP at Factor Cost has been replaced by Gross Value Added (GVA). With this change, GDP at market prices is now referred to in GDP in government accounts. This change is as per recommendations of the United Nations System of National Accounts in 2008 and Pronab Sen Committee. The idea behind this change was mainly to make India’s GDP numbers comparable with that of developed nations.  Thus, the following are the key changes in India’s national accounts:

Difference between GDP and GVA

Trends in India’s GDP and GVA

As per the first AE, the growth rate of gross value added (GVA) at constant basic prices for 2016-17 is placed at

As per data, the growth of agriculture & allied sectors improved significantly in 2016-17, following the normal monsoon in the current year which was preceded by sub-par monsoon rainfall in 2014-15 and 2015-16. Higher growth in agriculture sector in 2016-17 is not surprising; rabi sowing so far and the first advance estimates of the kharif crop production for the year attest to this. 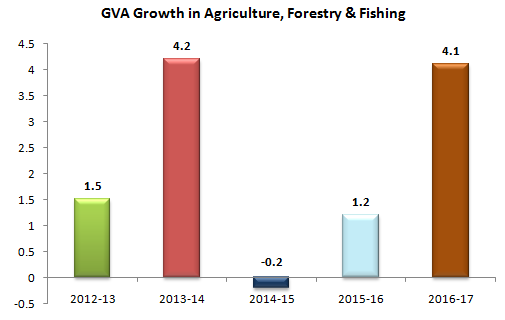 After achieving a real growth of 7.4 per cent in terms of value added in 2015-16,  the growth in industrial sector, comprising mining & quarrying, manufacturing, electricity, gas & water supply, and construction sectors moderated in 2016-17. This is in tandem with the moderation in manufacturing, mostly on account of a steep contraction in capital goods, and consumer non-durable segments of Index of Industrial Production (IIP). The contraction in mining and quarrying largely reflects slowdown in the production of crude oil and natural gas.

As in the previous years, the service sector continued to be the dominant contributor to the overall growth of the economy, led by a significant pick-up in public administration, defence & other services, that were boosted by the payouts of the Seventh Pay Commission. Consequently, the growth in services in 2016-17 is estimated to be close to what it was in 2015-16.

We note here that since 1991, Services have grown tremendously in India and service sector has become engine of India’s economic growth. With double digit growth in finance, real estate, professional services etc.

We recall here that the economic development is marked by a shift from the dominance of primary sector to that of the secondary and tertiary sector. In our country, the share of services has been consistently rising; more so since 2004-05. Even today, the growth in India’s service sector is second largest, only after China. But, this expansion of the tertiary sector is not balanced because of two reasons:

Firstly, Indian economy skipped dominating secondary sector and instead, the tertiary (services) sector became dominating directly from primary sector. This growth has been at the cost of manufacturing sector, which remained sluggish for several decades. Due to this, India’s growth has truly become a services led growth currently.

Secondly, growth in tertiary sector cannot thrive if there is no growth in primary and secondary sector because these three sectors are inter-dependent via the inter-sectoral linkages. This is evident from the fact that the inputs for services sector come from the industrial and agricultural sectors. Thus, for long term sustainability of the services sector, there has been a need for revival in commodity producing sectors.