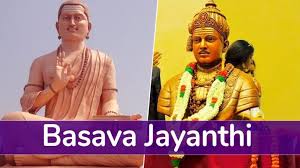 On May 3rd, 2022, Basava Jayanti, the birth anniversary of renowned philosopher Basaveshwara was celebrated.

Basavanna was a 12th-century poet, philosopher, and social reformer during the reign of the Kalyani Chalukya/Kalachuri dynasty.

When is Basava Jayanthi celebrated?

As per the Hindu calendar, the birth of Basavanna falls on the 3rd day of Vaisahaka month in the Shukla paksha. This usually falls either in April or May of the English calendar. It is celebrated primarily in the states of Karnataka, Maharashtra, Telangana, and Andhra Pradesh.

Which sect did Basavanna establish?

Basavanna is the founder of Lingayatism.

It is a Hindu denomination based on Shaivism. Lingayatism emphasizes qualified monism (vishista Advaita), with philosophical foundations similar to those of the 11th–12th-century Ramanuja. Lingayatism rejects the authority of Vedas and Puranas.

What social reforms are brought by Basavanna?

What is Anubhava Mantapa?

What are the literary works of Basavanna?

His literary works include the Vachana Sahitya in the Kannada Language. Through vachanaas, he spread social awareness in society.