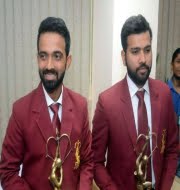 Cricketers Ajinkya Rahane and Rohit Sharma were conferred with the Arjuna Award for their contributions to sport of cricket.
The award was bestowed upon them by Union Sports Minister Vijay Goel in New Delhi. Sharma was bestowed with the award for the year 2015 and Rahane for the year 2016.
Earlier, both were not able to receive awards from the President Pranab Mukherjee as they were participating in international tournaments.