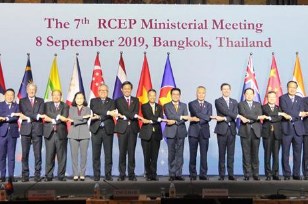 The 7th Regional Comprehensive Economic Partnership (RCEP) ministerial meeting of 10 members of ASEAN countries and their six FTA (free trade agreement) partners is being held in Bangkok, Thailand from 8-10 September 2019.

Participants emphasized that the ongoing global uncertainties have added to urgency to conclude mega free trade agreement (FTA) between these nations.

As per the joint statement issued after the meeting, which reviewed RCEP negotiations on 8 September (in Bangkok), the 16 negotiating partners agreed that they should not lose long-term vision of deepening and expanding value chains in RCEP.

Matters related to promotion of trade and investment among partner countries will be discussed in India ASEAN AEM and EAS-EMM meetings.

India’s engagement with ASEAN is at core of ‘Act East’ policy of India. ASEAN is the gateway to Indian Ocean region (IOR) and as close partners, there is convergence of views in India’s and ASEAN outlook in region.

Trade and investment relations: India and ASEAN’s trade relation continue to grow as India’s bilateral trade jumped threefold from $21 billion in 2005-06 to $96.7 billion in 2018-19.  Also, in 2018-19 ASEAN countries together emerged as largest trading partner of India (followed by USA), with a share of 11.47% in India’s overall trade on the other hand India was ASEAN’s 6th largest trading partner in 2018.

Investment flows between Indian and ASEAN are also substantial.  In between April 2018 to March 2019 the Foreign Direct Investment (FDI) inflows into India from ASEAN was about $16.41 billion (which is about 36.98 % of total FDI flow into India) and FDI inflows from India to ASEAN in 20018 amounted to $1.7 billion, placing India as ASEAN’s 6th largest source of FDI.

RCEP negotiations were formally launched in November 2012 at ASEAN Summit held in Cambodia.