Types of Soils in India

Soil is the mixture of rock debris and organic materials which develop on the earth’s surface. The major factors affecting the formation of soil are relief, parent material, climate, time, and biodiversity including the human activities. India is a diverse country with variety of relief features, landforms, climatic realms and vegetation types. These have contributed in the development of various types of soils in India. 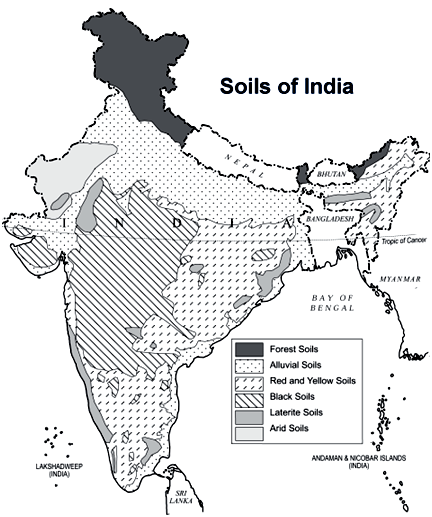 In ancient times, soils used to be classified into two main groups – Urvara and Usara, which were fertile and sterile, respectively. In medieval times, the soils were classified on the basis of the external features such as texture, colour, slope of land and moisture content in the soil. So, the soils were identified as sandy, clayey, silty and loamy, etc. Then, they were also classified on the basis of colour such as red soil, yellow soil, black soil, etc.

The Indian soils have been classified by ICAR on the basis of characters as per the United States Department of Agriculture (USDA) Soil Taxonomy. These types are as follows:

The Indian Classification of Soils

On the basis of genesis, colour, composition and location, the soils of India have been classified into various soils such as Alluvial soils, Black soils, Red and Yellow soils, Laterite soils, Arid soils, Saline soils, Peaty soils, Forest soils etc.

Important Observations have been written down in the below descriptions:

Alluvial soils, the depositional soils transported by rivers, are the predominant type of soil in the northern plains of the country, widespread in the Ganga plains and the river valleys. These soils cover about 40 per cent of the total area of the country.

Apart from the northern Gangetic plains, via a narrow corridor in Rajasthan, they extend into the plains of Gujarat.

In the Peninsular region, they are found in deltas of the east coast such as Mahanadi , Godavari and Krishna.

The alluvial soils are generally rich in potash but poor in phosphorous.

In the Upper and Middle Ganga plain, two different types of alluvial soils have developed, viz. Khadar and Bhangar.

The colour of the alluvial soils varies from the light grey to ash grey. Its shades depend on the depth of the deposition, the texture of the materials, and the time taken for attaining maturity. Alluvial soils are intensively cultivated.

Coastal Alluvium: Please note that the alluviums of the peninsular coastal strip are darker in colour than the alluvium of the northern plains because the rivers of the peninsula flow over the Deccan Plateau composed of basalt, and over black soil are only to deposit It in coastal areas . Maharastra has no alluvial soils but coastal alluvium is found in that state.

Most of the Deccan plateau, including Maharashtra, Madhya Pradesh, Gujarat, Andhra Pradesh and some parts of Tamil Nadu has black soils .

In the upper reaches of the Godavari and the Krishna, and the north western part of the Deccan Plateau, such as parts of Gujarat, the black soil is very deep. These soils are also known as the ‘Regur Soil’ or the ‘Black Cotton Soil’.  This soil is of volcanic origin.

The black soils are generally clayey, deep and impermeable. They swell and become sticky when wet and shrink when dried. So, during the dry season, these soil develop wide cracks. Thus, there occurs a kind of ‘self ploughing’. Because of this character of slow absorption and loss of moisture, the black soil retains the moisture for a very long time, which helps the crops, especially, the rain fed crops, to sustain even during the dry season.

Chemically, the black soils are rich in lime, iron, magnesia and alumina. They also contain potash. But they lack in phosphorous, nitrogen and organic matter. The colour of the soil ranges from deep black to grey.

On the eastern and southern parts of the Deccan Plateau, the Red soil develops on crystalline igneous rocks.

These soils are abundant along the eastern slopes of Western Ghats, Odisha and Chhattisgarh and in the southern parts of the middle Ganga plain.

The soil develops a reddish colour due to a wide diffusion of iron in crystalline and metamorphic rocks. It looks yellow when it occurs in a hydrated form (Iron Hydroxides).

The fine-grained red and yellow soils are normally fertile, whereas coarse-grained soils found in dry upland areas are poor in fertility due to leaching of the nutrients. They are generally poor in nitrogen, phosphorous and humus but respond well to fertilizers.

The Laterite soils develop in areas with high temperature and high rainfall and are common in the high altitude areas of Peninsular plateau.

Laterite soil and is mainly found on the summits of the Western Ghats, Eastern Ghats, Rajmahal Hills, Vindhyas, Satpuras and Malwa plateau, thus abundant in Karnataka, Kerala, Tamil Nadu, Madhya Pradesh and the hilly areas of Odisha and Assam.

Laterite soil represents intense leaching due to heavy rains, due to which the lime and silica are leached away, and soils rich in iron oxide and aluminium compound are left behind. Then, the Humus content of the soil is removed fast by bacteria that thrives well in high temperature.

This implies that the Laterite soil is poor in organic matter, nitrogen, phosphate and calcium, while iron oxide and potash are in excess.  Due to excess of Iron, laterites are not suitable for cultivation; however, application of manures and fertilisers are required for making the soils fertile for cultivation.

Laterite soils are widely cut as bricks for use in house construction.

Arid soils, which is sandy and saline soil is abundant in arid regions of western Rajasthan. These soils are poor and contain little humus and organic matter. The color appears from red to brown.

In some areas, the salt content is so high that common salt is obtained by evaporating the saline water. Due to the dry climate, high temperature and accelerated evaporation, they lack moisture and humus. Nitrogen is insufficient and the phosphate content is normal.

Lower horizons of the soil are occupied by ‘kankar’ layers because of the increasing calcium content downwards. The ‘Kankar’ layer formation in the bottom horizons restricts the infiltration of water, and as such when irrigation is made available, the soil moisture is readily available for a sustainable plant growth.

Saline soils or Usara soils contain a larger proportion of sodium, potassium and magnesium, and thus, they are infertile, and do not support any vegetative growth.

They have more salts, largely because of dry climate and poor drainage. They occur in arid and semi-arid regions, and in waterlogged and swampy areas.

Their structure ranges from sandy to loamy. They lack in nitrogen and calcium.

Forest soils are formed in the forest areas where sufficient rainfall is available. The soils vary in structure and texture depending on the mountain environment where they are formed.

They are loamy and silty on valley sides and coarse-grained in the upper slopes.

In the snow-bound areas of the Himalayas, they experience denudation, and are acidic with low humus content. The soils found in the lower valleys are fertile.

Rice, wheat, sugarcane, cotton and jute all grow well in these soils.

Only drought-resistant crops such as barley and millet can grow in this type of soil.

It is an acidic soil and is rich in iron, which gives the soil a somewhat red appearance. Cash crops such as cashew, rubber, coconut, tea and coffee.

Derive names from the very large amounts of iron oxide & Hydroxides present in them. They are sandy and somewhat acidic, and are also low in nitrogen and phosphorous. Despite this, red and yellow soils are used to grow rice, wheat, sugarcane, millet, groundnut, ragi and potato.