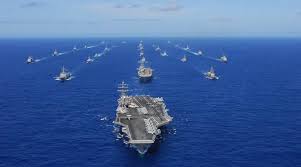 United States had withdrawn invitation to Chinese navy to participate in 2018 Rim of the Pacific (RIMPAC) maritime exercise. The withdrawal was in response China’s continued illegal militarisation of islands in disputed South China Sea. RIMPAC 2019 is the 26th exercise of its type, after first being held in 1971. More than 25,000 naval officers from 29 countries are expected to take part in it.

China claims almost entire strategic South China Sea (SCS), where Brunei, Malaysia, Philippines, Taiwan and Vietnam have conflicting claims. China has built strategic runaways and ports on the artificial islands in the SCS. It also has deployed weapons such as surface-to-air missiles to contested features in Spratly (Nansha) Islands and its landing of bomber aircraft on Woody (Yongxing) Island. US has conducted freedom of navigation operations close to China-claimed areas to challenge what it sees as China’s excessive claims. China had participited in the last two Rimpac exercises (2014 and 2018). Notably, Chinese and US Navies also had conducted joint submarine rescue drill aboard Chinese vessel during 2016 exercise.

Rim of the Pacific (RIMPAC) Exercise

The RIMPAC is the world’s largest international maritime warfare exercise. It is held biennially near Honolulu, Hawaii (US) during June and July of even-numbered years. It is hosted and administered by the United States Navy’s Pacific Fleet (headquartered at Pearl Harbor) in conjunction with Marine Corps, Coast Guard, and Hawaii National Guard forces under control of Governor of Hawaii. For this exercise, host country US invites military forces of countries from Pacific Rim and beyond to participate. The biennial exercise seeks to provide a unique training opportunity to participants in order foster cooperative relationships to ensure the safety of sea lanes and security on the world’s oceans.