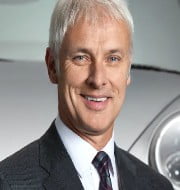 German auto maker Volkswagen AG has appointed Matthias Mueller as its new chief executive officer (CEO).
Prior to this appointment, he was serving as CEO of Volkswagen’s subsidiary Porsche AG.
He will succeed Martin Winterkorn who had resigned from office following an emissions cheating scandal (dubbed as Diesel Dope) described as a moral and political disaster.
Matthias Mueller first priority as CEO would be to win back trust of investors following a plunge in Volkswagen AG stock by 30 per cent over the Diesel Dope scandal. The scandal had damaged the reputation of world’s largest car manufacturer’s in terms of sales and had threatened its business.
Earlier, Volkswagen AG had admitted that it had cheated on diesel car emission test in United States by manipulating it by making changes in software on more than 4 lakh cars.
Currently, US Environmental Protection Agency (USEPA) is investigating into Volkswagen over the Diesel Dope scandal. Transport authorities in several countries including the United Kingdom, South Korea and Germany etc also have announced their own investigations.