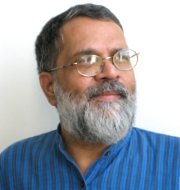 Veteran journalist, author, political analyst and anti-nuclear activist Praful Bidwai passed away in Amsterdam, Netherlands. He was 64.
He died due to cardiac arrest after he had choked on his food.