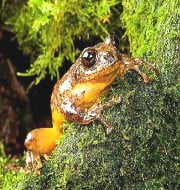 Researchers have discovered a new genus of tree hole-breeding frogs named Frankixalus in the forests of northeast India and bordering parts of China.
It was discovered by team of researchers led by Professor Sathyabhama Das Biju who is popularly known as the frogman of India.
Key facts

Findings in this regard have been published in a paper in the international journal PLoS One. It should be noted that this new genus includes species of frogs which were first described in 1876 based solely on museum specimens.