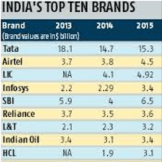 Brand finance in its 2017 report that lists India’s 100 most valuable brands has named Tata Group as the most valuable brand in India at an estimated brand value of $13.1 billion. Brand Finance is a global brand valuation and strategy consultancy firm. Tata Group has managed to top the list despite its brand value declining 4% from $13.7 billion in 2016.
As per the report, the total brand value of India’s top 100 brands have surged 15% in 2017 compared to the global average of 11%. Overall 68 of India’s 100 most valuable brands have registered growth in value this year.
Telecom operator Airtel at an estimated valuation of $7.7 billion has been ranked second in the list followed by Life Insurance Corporation of India (LIC) with $6.8 billion.
IT firm Infosys and State Bank of India have been ranked fourth and fifth in the list with an estimated value of $6.2 billion and $5.5 billion respectively.
Backed by the addition of 35 new routes and increase in operations in the existing route, Indigo Airlines  jumped from No. 95 in 2016 to No. 62 in 2017 in the Brand Finance list.
Handset maker Micromax’s performance has suffered the most with its brand value dropping by 39% and fell to the 95th position in the list of top 100 brands.
Air carrier Indigo Airlines gained the most. Indigo jumped from No. 95 in 2016 to No. 62 in 2017 in the Brand Finance list.
The report has named ITC as the most powerful brand in the country. As per the report it is the country’s only AAA rated brand with a Brand Strength Index score of 86.