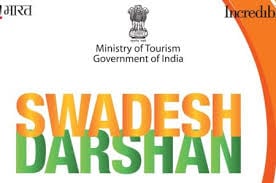 The first project under Swadesh Darshan Scheme ‘North East Circuit: Imphal and Khongjom’ was inaugurated in Manipur. The project covers two sites i.e. Kangla Fort and Khongjom in Manipur. Under this project, Union Tourism Ministry has carried out works such as restoration and improvement of outer and inner moat of old Govindajee Temple and rejuvenation of sacred ponds, reconstruction of old rampart, among others.

Kangla Fort is one of the most important historic and archaeological site of Manipur located in the heart of the capital city Imphal. It had served as tradition seat of past Meetei rulers of Manipur till 1891. The old Govindajee Temple is the largest Hindu, Vaishnav temple in Imphal city in Manipur. It is located next to Kangla Fort, palace of the former rulers of the then Manipur Kingdom. Its outer and inner moat and other relics are perfect reflections of the rich art and architectural heritage of Manipur.

The scheme was Union Tourism Ministry with an objective to develop theme-based tourist circuits in the country. These tourist circuits will be developed on the principles of high tourist value, competitiveness and sustainability in an integrated manner. It is 100% centrally funded scheme for the project components undertaken for public funding. It also has provision for leveraging voluntary funding under Corporate Social Responsibility (CSR) initiatives of Central Public Sector Undertakings and corporate sector. The funding of projects under this scheme vary from state to state. It is finalised on the basis of detailed project reports prepared by Programme Management Consultant (PMC) which is national level consultant for implementing the scheme.