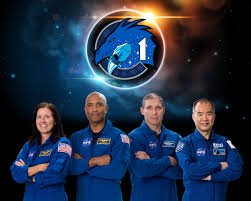 On November 16, 2020, SpaceX launched four astronauts into the space under Mission Crew 1. The Crew Dragon capsule becomes the first spacecraft to be certified by NASA after 40 years. Being the first in a series, there will be regular flights by the SpaceX to the International Space Station.

The SpaceX Falcon 9 rocket was used to launch the spacecraft and is reusable. The SpaceX has scheduled to launch two more crewed flights in 2021. The mission was initially planned to be launched in July 2020. However, it was postponed due to covid-19 pandemic.

Astronauts in the mission

Crew 1 is the first operational mission under the Commercial Crew Programme of NASA. Under the programme, NASA aims to carry crews to and from International Space Station and Low Earth orbit. It was launched in 2010 with NASA investing about 50 million USD. Later in 2016, the SpaceX and Boeing joined the programme.

The following are the missions under the programme

It was launched in May 2020. It carried two astronauts to the International Space Station. The mission was considered highly significant to the US government as it was carried out even amidst covid-19 pandemic.

It is an upcoming mission of SpaceX that is to be launched in 2021.