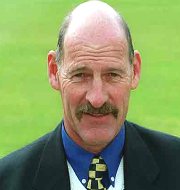 Former South African all-rounder cricketer Clive Rice passed away in Johannerburg, South Africa. He was 66 and was suffering from brain tumour.
He was one of the best all-rounders of his era alongside Kapil Dev, Imran Khan, Ian Botham and his county team-mate Richard Hadlee.
Rice had started his cricket career in 1969 with Transvaal (first-class cricket team). He had played most of his cricket during South Africa’s 2 decade long isolation from the international games. He mostly had played for Nottinghamshire County Cricket Club from 1975 to 1987 and was captain of the club from 1979 to 1987.
Under his captainship, South Africa had won County Championship title twice in 1981 and 1987. In November 1991, after South Africa was allowed in international games, he captained and played debut one-day internationals (ODIs) against India.
In Rice’s overall first class cricket career, his batting average was of 40.95 and a bowling average of 22.49.