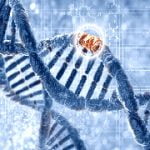 Scientists from Harvard Medical School for first time have encoded a small movie clip in the DNA of living bacterial cells and then played it back.
They had used the CRISPR gene-editing technique to encode and retrieve reconstructed frames of a classic 1870s racehorse in motion sequence of photos into the genome of common gut bacteria E. coli.
Scientists have found out that despite the genetic modification, the bacteria thrived and multiplied. The film stored in the DNA of bacteria was also well preserved and was intact even in new generation of bacteria.

The information in the DNA is stored in strings i.e. in the form four-letter DNA code. It is basically sequences of four building blocks (nuclear strands) abbreviated as A (Adenine), C (Cytosine), T (Thymine) and G (Guanine) found in DNA molecule. Specific sequences of these blocks give the body directions for creating particular proteins.
Basically digital devices store information in binary format (1s and 0s) i.e. in a two-letter code that produces strings of 1s and 0s. For ex. capital ‘A’ stored as 01000001 in binary format. In case of converting and storing digital information in DNA involves translating between the two sequences or codes of four building blocks.  For ex. capital ‘A’ converted and stored as AATATG.
The DNA digital data storage technology uses artificial DNA made using oligonucleotide synthesis machines for storage and DNA sequencing machines for retrieval of stored data. Using this technology strings of DNA can be custom-made that can carry the new code, and store information that code contains.
DNA digital data storage technology has very long durability i.e. scientists can store digital information in DNA sequences for thousands of years. Information stored in DNA consumes very little space. However, making this technology practical and much cheaper using current technology is hugely expensive.

CRISPR is short form of clustered regularly interspaced short palindromic repeats. It allows to selectively edit genome parts and replace them with new DNA stretches. Cas9 is an enzyme that can edit DNA, allowing the alteration of genetic patterns by genome modification. CRISPR is a collection of DNA sequences that direct Cas9 where to cut and paste. CRISPR-Cas9 technology has the potential to revolutionise the treatment of blood diseases, tumours and other genetic diseases.