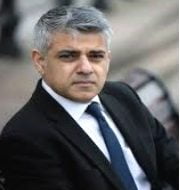 Sadiq Khan of the British Labour party has been elected the new Mayor of London by comfortably outrunning of his nearest rival.
With this Mr Khan became London’s first Muslim mayor. His victory also marks the return of Labour Party rule in the British capital after eight years of Conservatives in power.
In the elections, Mr. Khan won 44 per cent votes in the first preference votes to Conservative Zac Goldsmith’s 35 per cent.  While in the second preference votes, he crossed 50 per cent threshold to get elected.