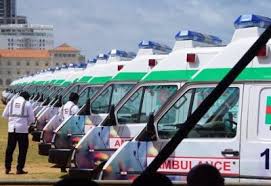 Jaffna is third province in Sri Lanka, were India-assisted emergency ambulance service has been launched. The service was earlier introduced in two provinces of Sri Lanka with grant assistance from India. It is planned to be expanded to remaining seven provinces of Sri Lanka. For this project, India in total has given grant of $22.8 million- $7.6 million for the first phase and $15.2 million for the country-wide expansion. This is largest ever Indian grant project in Sri Lanka after India funded housing project.

India had launched emergency ambulance service in Sri Lanka’s western and southern provinces in July, 2016 with grant of US $7.6 million to uplift and improve medical facilities in the island country. In this regard, agreement was signed between Indian entity GVK EMRI Lanka Pvt Ltd and Sri Lankan Ministry of Health Nutrition and Indigenous Medicine. With this project, pverall, India’s development portfolio in Sri Lanka is nearly US $2.6 billion, out of which US $436 million is in the form of grants.