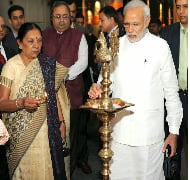 Prime Minister (PM) Narendra Modi has inaugurated the Dandi Kutir museum in Gujarat’s capital of Gandhinagar. It is a state-of-the-art three-storey museum, based upon the life and works of Mahatma Gandhi.
It was inaugurated on the occasion of the 13th Pravasi Bhartiya Divas (PBD) and 7th edition of Vibrant Gujarat.