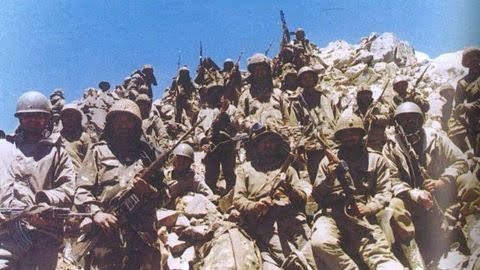 Every year, Infantry Day is celebrated on October 27. In India, the day is celebrated to mark the landing of first Indian troops in the Jammu and Kashmir region in 1947. The troops landed to push back Pakistan.

This year, the US Secretary of State Michael Pompeo and the US secretary of Defence Mark Esper paid tribute at the National War Memorial. Prime Minister Modi and other Indian leaders greeted the Infantry of Indian Defence Forces as well.

What is an Infantry?

Infantry is one of the four major combat arms of Indian Army. The other three are Armoured Corps, Mechanised Infantry and Artillery. The combat support arms of the Indian Army includes Corps of Signals, Army Air Defence, Corps of Engineers and Army Aviation Corps.

Infantry comprises of soldiers equipped with machine guns, assault rifles and grenades. They defend posts, carry out combat raids on foot, hold positions in bunkers and pickets in forward areas along the Line of Actual Control and other international borders.

Infantry is generally referred to as “Queen of the Battle”. They are the first to get deployed in the battlefield. Also, they are the last to come out of deep trenched war.

The Indian Army Infantry is made of battalions. Some of the regiments are Kumaon Regiment, Punjab Regiment, Rajputana Rifles and Gorkha Rifles.

What are the Indian Army Infantry Regiments?

The following are the Indian Army Infantry Regiments