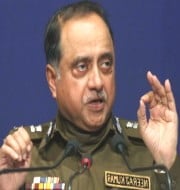 Former Delhi Police Commissioner Neeraj Kumar was appointed as chief adviser of the Board of Control for Cricket in India’s (BCCI) Anti-Corruption & Security Unit (ACSU).
Decision in this regard was taken at the Governing Council Meeting of the Indian Premier League (IPL) chaired by IPL chairman Rajeev Shukla in New Delhi,.
He will succeed Ravi Sawant as his term ended and will have term of one year.
In 2013, Delhi Police arrested former Test bowler S Sreesanth along with domestic spinners Ankeet Chavan and Ajit Chandila for allegedly getting involved in spot-fixing during the sixth edition of the IPL under Kumar’s leadership.
Neeraj Kumar is a 1976 batch IPS officer of the AGMU cadre. He police force career spanned nearly around 37 years. His tenure as the Delhi Police commissioner was of 13 months i.e. from June 2012 to July 2013.