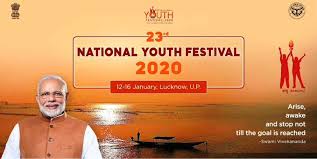 The theme for this year was chosen in pursuance of the goal of the Prime Minister of India, Narendra Modi for a New India to be a fit India while the festival will have a blend of diverse socio-cultural milieu that will prove the belief and commitment of the Prime Minister in ‘EK Bharat Shrestha Bharat’ as since the inception of the festival in 1995, it has provided the youths from across the country a platform to showcase their skills and talents in various activities. Similarly, for this year’s festival from 13th to 16th January different competitive events along with non-competitive events such as adventure camp, youth convention, folk dance, Yuva Kriti, etc will be organized.