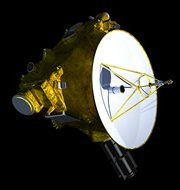 The National Aeronautics and Space Administration (NASA) has given its approval to extend New Horizons mission to investigate a mysterious object deep in the Kuiper Belt.
In the extended mission New Horizons space probe will investigate a mysterious object known as 2014 MU69 located deep in the Kuiper Belt.
2014 MU69: It is an ancient object considered one of the early building blocks of the solar system.  It lies about 1.5 billion kilometres beyond Pluto and is roughly 45 kilometres in diameter. Its exploration may help to give insights on the building blocks of the solar system.
Other decisions taken by NASA