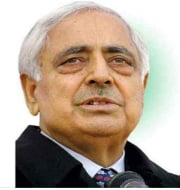 All of them were administered oath of office and secrecy by Governor Narinder Nath Vohra at oath taking ceremony held at Zorawar Singh Auditorium in Jammu University.
Mufti Sayeed’s swearing-in as Chief Minister brings to an end to 49 days of Governor’s rule imposed on the state.
Earlier in January 2015, Governor’s rule imposed as per Section 92 of state Constitution after the no party was able to form government following hung verdict of assembly election of 2014.