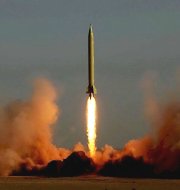 The missile traveled 6,750 km across Pacific Ocean to the Kwajalein Atoll in Marshall Islands.

On 2nd October North Korea tested a ballistic missile which is believed to be launched from a submarine. The test was confirmed by the South Korea officials.

The program was started in 1966. The missile is armed with 170 kilo tons of TNT. Airborne Launch Control System is a part of the missile. When Minuteman was first discovered the Soviet had no target to counter it. However, they gained pace after a few years. The airborne launch system offers a survivable launch capability to the US air force.

Following missile test by the countries, the leaders have agreed to hold talks in Stockholm. Since June, the US officials struggled to make North Korea to return to table. Currently North Korea is under many sanctions. The United Nations had earlier complained that the country had circumvented many sanctions.

It is a part of the Marshall Islands in Pacific Ocean. The US hosts naval base in the atoll. The total island area is just over 6 square miles.

Atoll is a ring-shaped coral reef. It is formed due to volcanic action. Long after the volcano receded into the ocean, corals begin to settle around the crater forming a ring-shaped colony called atolls