Meteorological Department issues warning of another dust storm in UP, Rajasthan 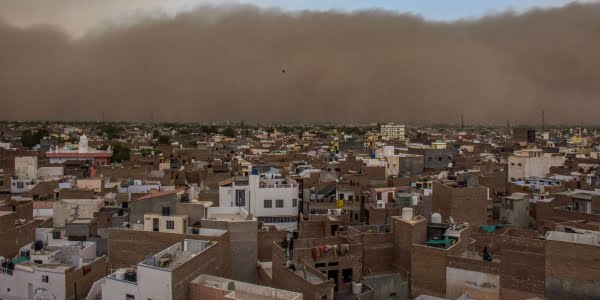 Indian Meteorological Department (IMD) has issued warning of another dust storm and thunderstorm in parts of Uttar Pradesh and Rajasthan. The satellite images have shown wind pressure developing in two states leading to thunderstorms, gusty winds and heavy rain. It also has forecasted thunderstorm accompanied with squall is also likely at isolated places over Uttarakhand, Sikkim, West Bengal and Odisha. The fresh warning comes after two north Indian states were earlier hit severe dust storm, which took lives of over 100 people and left trail of destruction.

Reasons for formation of rainstorms and duststorms

Rainstorms (thunderstroms) and duststorms arise from similar meteorological conditions. They are almost always preceded and caused by spell of intense heat. Thunderstorms occur when atmosphere has moisture and duststorms take place when moisture is not present. Such events take place due to local instability arising out of deviation from normal temperature difference between upper and lower atmosphere. Thus, these events themselves are very localised both in time and space.
In recent rainstorms and duststorms cases in Uttar Pradesh and Rajasthan, moist easterly winds from Bay of Bengal reached up to Himachal Pradesh colluded with dry winds from north-westerly direction. The two systems destabilised equilibrium temperature difference between upper and lower layers of atmosphere, leading to conducive conditions for thunderstorm and duststroms. The final trigger, however, is development of largescale air-circulation system. Many parts of India witness build-up of surface heat during this time of year. The places that were hit by recent storms had seen heat-wave like conditions.