Manohar Lal Khattar to be new Chief Minister of Haryana 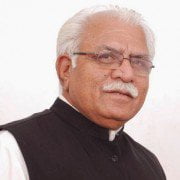 Former RSS veteran and first time legislator, Manohar Lal Khattar, is set to be sworn in as the new CM of Haryana at Tau Devi Lal stadium in Panchkula on October 26. His name was finalized by BJP’s 47 MLAs after a meeting of the legislative party.
60 year old Khattar is known for being extremely tech savvy and has worked closely with Narendra Modi before. Khattar is Haryana’s first non-Jat CM in 18 years, and only the fourth non-Jat leader in Haryana’s 48 year old history. He is also the first Punjabi CM of Haryana. This is also Khattar’s first time as a legislator. He won the Karnal seat by approximately 63,000 votes.

Khattar was born in Rohtak, Haryana. He began his career with the RSS in 1980, where he spent almost 35 years as an active pracharak. He formally joined the BJP only two decades ago. In 1994, he was made the Sangathan Mahamantri in Haryana. Also, he was Chairman of BJP’s Haryana Election Committee for the recent Lok Sabha elections.