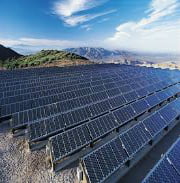 Maharashtra government has placed a comprehensive plan to develop six solar cities in order to add solar capacity of 7,500 MW in the state.
To enhance solar capacity in country Centre has planned to develop 55 solar cities across the country among them six are from Maharashtra these are – Nagpur, Thane, Aurangabad, Kalyan-Dombivli, Shirdi and Nanded
The selection of these cities was done on basis of the population and other criteria and would be developed through the joint funding from Centre and State Government.
To meet the increasing demand for power Maharashtra government has targeted to add 14,400 MW through renewable energy source.
Out of this target nearly 7,500 MW will be added through solar energy projects, over 5,000 MW will be added through wind and rest from other sources like industrial and domestic waste.
Development on BOT and PPP basis:

On eve of launching this plan the State government has also proposes to promote development of 1 MW solar plants and solar parks on irrigation canals, townships and in industrial areas.
Note: The development of these cities would not need approvals from the state pollution control board and land will be procured through deemed non agricultural approvals.