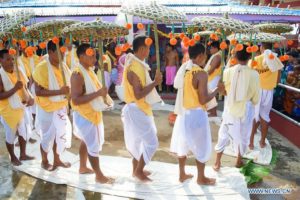 The annual festival of worship of 14 Gods, popularly known as Kharchi Puja is being celebrated in Tripura. It started at Chaturdash Devata Bari in old Agartala (Puran Agartala). The festival began on 10 July will continue till 16 July 2019.

According to an agreement signed with Royal family of Tripura, the Tripura government has been bearing all the expenses of the festival for the last several decades.

It is one of the most popular festivals in Tripura and is celebrated at Puran Agartala in temple premises of 14 gods.

The word Kharchi is derived from word ‘Khya’ which means earth thus Kharchi Puja is basically done to worship earth.

It’s a week-long royal Puja which falls in month of July on 8th day of new moon and attracts thousands of people.

The Puja celebrations extend till a week and are held in temple premises which are attended by thousands of devotees.

All of rituals during puja are of tribal origin, which includes worshipping of 14 gods and mother earth.

Puja is performed for seven consecutive days to wash out sins and to clean post menstrual phase of mother earth’s menstruation.

On day of Puja, 14 gods are carried to Saidra river by members of chantai where gods are bathed in holy water and are brought back to temple.

An important part of this festival includes animal sacrifice of goats and pigeons.