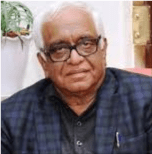 Retired judge of Delhi High Court Justice Mukul Mudgal has been elected as the Chairman of FIFA Governance committee at the FIFA’s 67th Congress held in Bahrain’s capital city of Manama.
Justice Mudgal was proposed for the vacant position by the FIFA Council after former chief Miguel Maduro was removed for his role in allegedly blocking Russian World Cup official Vitaly Mutko from retaining his seat on ruling council. Justice Mudgal will have a term of office of four years which would come into effect immediately.
Olli Rehn of Finland has been elected as Justice Mudgal’s deputy. Olli Rehn is the former Vice-President of the European Commission.
Justice Mudgal has served as the Chief Justice of Punjab and Haryana High Court from 2009 to 2011. in May last year, he was appointed as Deputy Chairman of the governance committee during the FIFA Congress in Mexico.