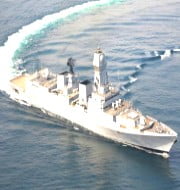 It should be noted that destroyers are second only to aircraft carriers to have raw combat power on the high seas.