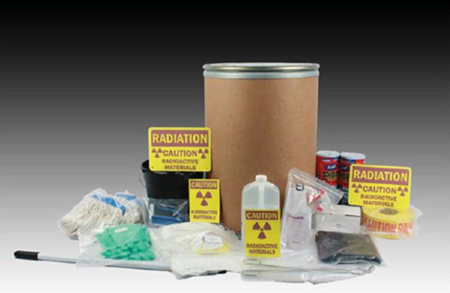 The kit has been developed after 20 years of work by INMAS scientists. It has 25 items which include radioactive protectors which can absorb 80-90% of radiation, nerve gas agents, bandages that absorb radiation as well as tablets and ointments. The kit is seen as potent alternative to similar imported kits that were till now procured from US and Russia at much higher prices. It has been developed for armed, paramilitary and police forces only as they are first ones likely to get exposed to radiation during nuclear, chemical and biomedical (NCB) warfare or rescue operation after nuclear accident.

Prussian blue tablet: It is highly effective in incorporating Radio Cesium (Cs-137) and Radio Thallium, among the most feared radioisotopes in nuclear bombs that destroy human body cells. It provides 100% absorption from gut and other portals of entry to human body.
Ethylenediaminetetraacetic acid (EDTA) injection: It traps uranium in the guts and blood of victims during a nuclear accident or warfare.
Ca-EDTA Respiratory Fluid: It is inhalation formula for chelation, or grabbing of heavy metals and radioactive elements deposited in lungs through inhalation at nuclear accident sites. EDTA after being injected into veins, grabs heavy metals and minerals and removes them from the body. It reduces the body burden of radioactivity by 30-40% in controlled conditions and is highly useful for the rescue teams and victims after a nuclear accident.
Radioactive Blood Mopping Dressing: It is special kind of bandage that absorbs radiation to prevent spread of radiation from radioactive patients to others. It will make safer for medical staff to handle radioactive patients as it reduces chances of them getting contaminated.
Radioactive urine/biofluid collector: It is cost-effective, easy to store and can safely dispose of the urine of person affected by radiation.
Anti-gamma ray skin ointment: It protects and heals the radiation damage on the skin.
Amifostine injection: It is US Food and Drug Administration (FDA) approved conventional radiopharmaceutical that limits damage from gamma radiation.
Indranil 150 mg tablet : It is reserve emergency therapeutic drug for services, rescue workers and places where high acute exposures are expected and lives will be at stake. Preliminary tests have shown that if it is given as prophylactic, 80-85% animals survive at 100% lethal gamma radiation .

INMAS is laboratory of Defence Research and Development Organisation (DRDO). It was established in 1961 and is located in New Delhi. It is involved in nuclear medicine research and responding to nuclear accidents and explosions. Since 1968, Department of Nuclear Medicine in INMAS is offering two-year diploma in radiation medicine. It is first formal training program in nuclear medicine in the world.