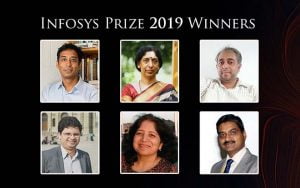 The six winners of Infosys Prize 2019 were felicitated with a pure gold medal, a citation and prize money of USD 100,000, which were presented by Bharat Ratna & Nobel Memorial Prize in Economic Science 1998 winner, Prof. Amartya Kumar Sen on Tuesday, 7th January 2020 at Bengaluru.  First awarded in the year 2008, the awards ceremony has been organized annually and funded by the Infosys Science Foundation (ISF) for outstanding achievement across six different fields, the winners of the 2019 award are