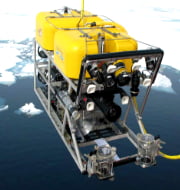 India’s first Polar Remotely Operated Vehicle (PROVe) was successfully operationalised for research in North Antarctica by National Institute of Ocean Technology (NIOT).
PROVe was operationalised, after it had undergone series of trials in Antarctica in the past two months since its deployment by the NIOT researchers.
It has been deployed in Priyadarshini Lake located on the Schirmacher Oasis which is a major source of water for Maitri, India’s second base in the Antarctica.
Key facts of PROVe

Implications of its operationalisation in Antartica

Current operation will collect data for analysis in June 2015. This data will be used for analyzing hypothesis about the link between Antarctic Ocean currents and Indian monsoon system.